A Service for EASTER SUNDAY

A Service for EASTER SUNDAY

Hynm, to be said or sung

Thine be the glory,
risen, conquering Son,
endless is the victory
thou o’er death hast won;
angels in bright raiment
rolled the stone away,
kept the folded grave clothes
where thy body lay

Thine be the glory
risen, conquering Son,
endless is the victory,
thou o’er death hast won.

Lo! Jesus meets us,
risen from the tomb;
lovingly he greets us,
scatters fear and gloom.
Let the Church with gladness
hymns of triumph sing,
for her Lord now liveth;
death has lost its sting.

Thin be the glory,
risen, conquering Son,
endless is the victory
thou o’er death hast won

No more we doubt thee,
glorious Prince of Life;
life is naught without thee;
aid us in our strife;
Make us more than conquerors
through thy deathless love;
bring us safe through Jordan
to thy home above.

Thine be the glory
risen, conquering Son,
endless is the victory,
thou o’er death hast won.

I lift up my eyes to the hills – from where is my help to come?
My help comes from the Lord, who made heaven and earth.

Glory to you O Lord

Early on the first day of the week, while it was still dark, Mary Magdalene came to the tomb and saw that the stone had been removed from the tomb. So she ran and went to Simon Peter and the other disciple,

the one whom Jesus loved, and said to them, “They have taken the Lord out of the tomb and we do not know where they have laid him”. Then Peter and the other disciple set out and went toward the tomb. The two were running together, but the other disciple outran Peter and reached the tomb first. He bent down to look in and saw the linen wrappings lying there, but he did not go in. Then Simon Peter came, following him, and went into the tomb. He saw the linen wrappings lying there, and the cloth that had been on Jesus’ head, not lying with the linen wrappings but rolled up in a place by itself. Then the other disciple, who reached the tomb first, also went in, and he saw and believed; for as yet they did not understand the scripture, that he must rise from the dead. Then the disciples returned to their homes.

But Mary stood weeping outside the tomb. As she wept, she bent over to look into the tomb; and she saw two angels in white, sitting where the body of Jesus had been lying, one at the head and the other at the feet. They said to her, “Woman, why are you weeping?” She said to them, “They have taken away my Lord, and I do not know where they have laid him”. When she had said this, she turned around and saw Jesus standing there, but she did not know that it was Jesus. Jesus said to her, Woman, why are you weeping? Whom are you looking for?” Supposing him to be the gardener, she said to him, “Sir, if you have carried him away, tell me where you have laid him, and I will take him away.” Jesus said to her, “Mary!” She turned and said to him in Hebrew, “Rabbouni!” (which means Teacher). Jesus said to her, “Do not hold on to me, because I have not yet ascended to the Father. But go to my brothers and say to them, “I am ascending to my Father and your Father, to my God and your God”. Mary Magdalene went and announced to the disciples, “I have seen the Lord”, and she told them that he had said these things to her.

This is the Gospel of the Lord,

Praise to you O Christ. 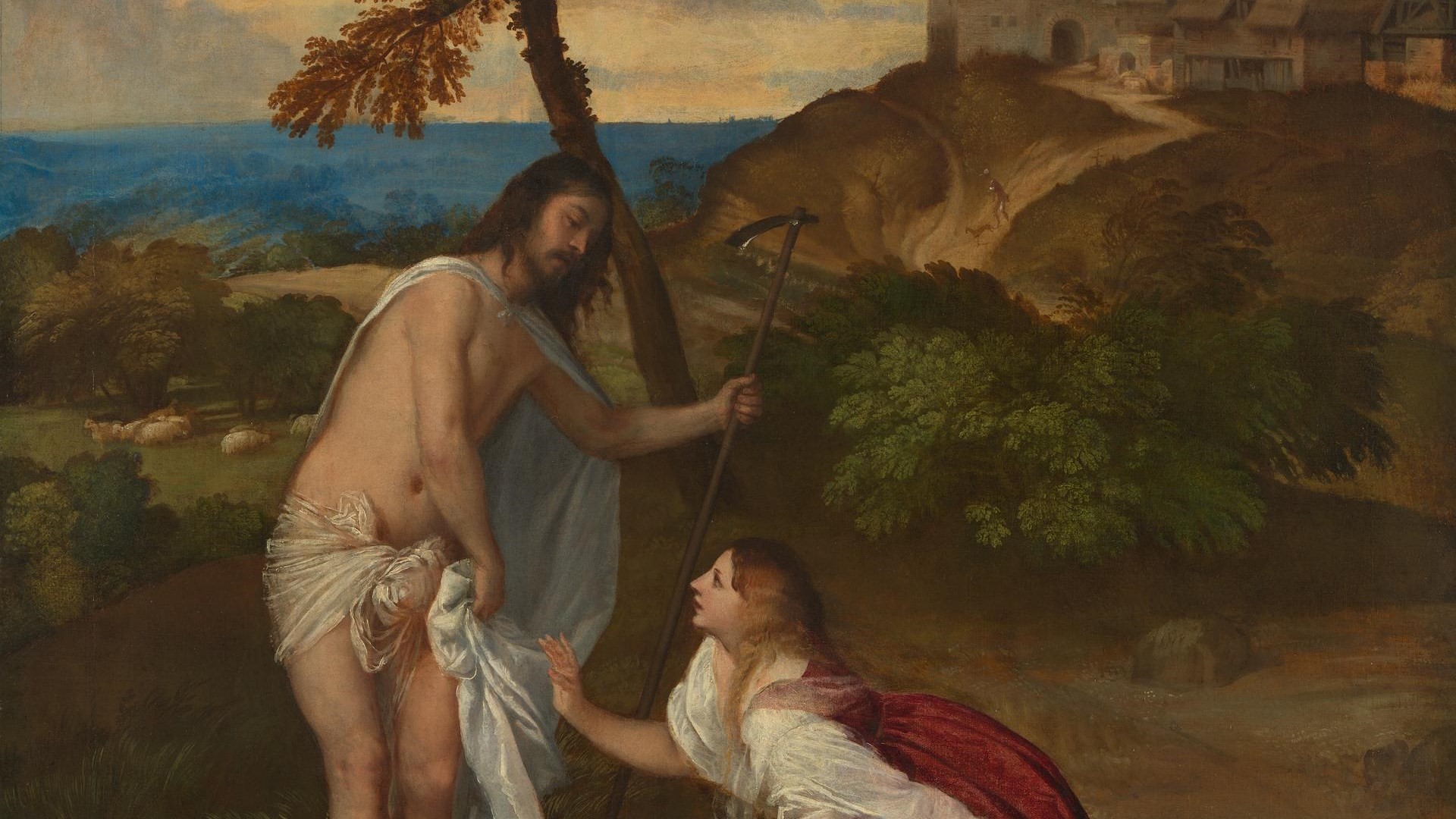 During the crisis of the second world war a painting of the risen Christ with Mary Magdalene, entitled Noli me Tangere or do not touch me, was London’s most treasured picture.  The artist was the 16th century painter Titian, and for one month in 1942 the picture was, by public demand, the sole painting on display in the National Gallery. Thousands of other works had been taken away for safekeeping in the Welsh slate mines. The painting was cherished

because as the bombs fell, Londoners found reassurance in the story that love is so strong that it can survive death.

The appearances of Jesus after His death have the ring of truth about them because they are so low key. Even though Jesus rising to life from death was the turning point of the whole Western civilization, the scene is not over dramatised. Resurrection came with the whisper of a name and a message of good news.

Jesus’ first appearance was to Mary Magdalene, a woman who had lost her way in life and then found calm and purpose when she followed Jesus. When she saw the tomb empty, her whole life was turned upside down and she was heartbroken. But the sound of her name from the one who loved her, brought her back to life. She saw the risen Christ. She was the first one commanded by Jesus to tell others.

We find ourselves this Easter in a world that is turned upside down and we too are heartbroken for the loss of our daily life, for the faces of our family and friends, for the joy of coming together at Easter. And yet the

resurrection of Jesus is no less a turning point for our civilisation and without the distractions of our world,

we can hear again His voice, calling out to us by name. We may not recognise Him, for He has risen from our sight, but His call rings out to our generation, summoning us to see what He has done. Once and for all He has overcome death and darkness, He wants us to know Him as our Risen Lord, the Love of our life.

Let each congregation rejoice, even though scattered, let each heart and mind rejoice for Christ is risen.
Lord Jesus, may we rejoice in your glory and the power of your resurrection.

Lord may we know you now,

Almighty and Loving God, we pray to you for all those struggling today with the sheer impact of corona virus throughout this country and the whole world. We thank you that we know that you never turn away from our anguish and heartbreak. We pray for all those longing for an end to isolation and the building up of a better world, full of new hope and new life. Lord we thank you for those who are literally being set free. The homeless on our streets being brought in to shelter. The prisoners being set free from their sentence for minor offences. The hungry being delivered food and the elderly being sheltered from the risk of infection.

Lord may we all know you,

Heavenly Father, we pray for those who are walking in darkness on this Easter Day.

For those suffering pain from the corona virus, for those who wait and watch from a distance, for all distressed and disturbed people, for those who are near to death this day. We continue to pray for those who mourn, without the comfort of funeral or prayer to sustain them. Lord as you know all of our names, speak the words of your love to each and everyone who hurts this day.

Lord may we know you.

Lord, we remember before you those who are deeply bereaved, especially those who have lost family who were serving in the NHS. We thank you that they have answered the call to serve your people. We pray turn your loving face towards them as they enter the gates of glory. May they rest in peace where sorrow and pain are no more and they are known by name.

Lord may we know you.

And now to all our churches and all our clergy, and all the peoples of our parishes in the Brackley Deanery, May you know, in your life, the presence of the risen Lord, the peace of Christ who is the eternal, and the power of His resurrection, and the blessing of God, Father, Son and Holy Spirit, be with you now and for ever.

Annunciation by Gabriel to the Virgin Mary